The Minister for Veterans’ Affairs and Minister Assisting the Prime Minister for the Centenary of Anzac, Dan Tehan, on Tuesday 15th March presented awards to the winners and runners-up in the 2016 Simpson Prize at Parliament House Canberra. 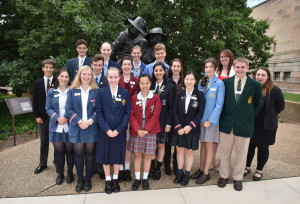 State and territory winners and runners-up

“The Simpson Prize is a prestigious national history competition and whether a winner or a runner up, all the students who have participated should be very proud of their achievements,” Minister Tehan said.

Minister for Education and Training Simon Birmingham said there had been an overwhelming level of interest from students for the 2016 Simpson Prize.

“We had more than 1,000 students submit an essay or audio-visual presentation this year, all focused on the prominence of the Gallipoli landing in the Anzac story and what other events or experiences should get more attention,” Minister Birmingham said. 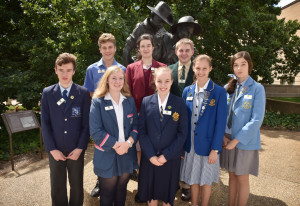 In what was a most deserving recognition of the state and territory competition coordinators he stated “I would like to thank the History Teachers’ Association of Australia for their tireless behind-the-scenes work in promoting this competition to schools across Australia, receiving entries and selecting this year’s fine group of winners and runners-up.”

A wonderful aspect of the 2016 Simpson Prize Competition was the representation of regional Australia in the selection of the two Simpson Prize Teacher Chaperones. They are Charleen Conroy, Katherine High School, Northern Territory and Cendall Cowan, Lock Area School, Eyre Peninsula, South Australia.